What is sand blasting Machine 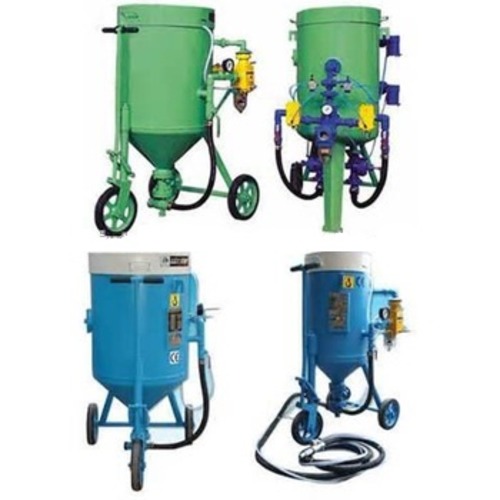 Sandblasting is a way of smoothing and cleaning a hard surface by forcing solid particles on the surface of the workpiece at high speeds by using compressed air from the air compressor.

With aggressive blasting, the sand moved against a surface. With shot blasting, on the other hand, small metal balls or beads are propelled or moved against a texture. The beads are often made of stainless steel, copper, aluminum, or zinc. In this case, all of these metals are harder than sand, making shot blasting even more effective than its aggressive blasting equivalent.

Portable Abrasive Blasting Machineis a machine that can be movable from one place to another and blasting work can be done easily.

AIR FILTER – prevents impurities such as moisture, etc. from the air compressor.

MUSHROOM BALL- used for creating the pressure inside the hopper.

NET REALIZABLE VALVE – used to control the amount of air supply and also prevents air to go back.

REMOTE CONTROL – used for on/off the supply of air.

PINCH VALVE – is a two-way valve designed to shut off or control the flow of abrasives.

MIXING TUBE- where mixing of air and abrasive takes place.

BLASTING HOLES- from which the hose pipe is connecting.

BLASTING NOZZLE- is a device that accelerates the air and abrasive blasting mixture over a material’s surface that exhibits pitting and needs repair and subsequent protection from corrosion.

Types of Abrasive Used In Portable Abrasive Blasting are:

First of all, Portable Blasting Machine is completely filled with Abrasive (garnet, glass beads, aluminum oxide, etc.) as per the requirement inside the hopper. After filling the hopper completely with the abrasive air compressor valve is opened manually. As the air starts to flow from the air compressor to the air filter where the air gets filtered and moisture is removed from it. And another supply of air is directly given to the hopper which is used to create pressure inside the hopper with the help of a mushroom ball.

Air from Air Filter flows to Remote control which is used for the purpose of ON/OFF the supply of air. As supply is ON, air continues flowing from Net Realizable Valve (NRV) which is used to control the amount of air supply and also prevents air to go back. From NRV air flows to Pinch Valve.

The disadvantage of portable blasting

Suction Blasting is a clean, dust-free sandblaster that leaves the surface cleaned and well prepared for painting, etc after treating corrosion or unfinished surface